This is the fourth in my series of posts on the first sunrise of the year, or Hatsuhi no De in Japanese (初日の出).  I've been making a habit of writing these things, and today seemed a worthy day to attempt to see the first rays of the sun and follow the tradition of a people not my own.

Before bed, I set an alarm close to sunrise, but left a window open.  The twilight won the alarm contest, awaking me three minutes before the iPhone.  With calm winds and warm-for-sunrise-in-winter temperatures, I dressed relatively lightly -- just a wool shirt and jeans.  This proved to be quite enough for today.  Like, I wasn't cold the entire time, which is a pleasant change.

I kind of cheated this year, letting the twilight wake me. That was late enough to miss the early action; by the time I got outside, all of the birds were already awake, if still organizing their rounds with various chirps, cries, and caws.

The layers of high clouds spanning the sky had an pinkish hue when I woke up, making this a pretty late start -- but for once I had spent the night out partying, so it's not like I was going to push it today.

I climbed atop the dew-soaked rooftop, it still bearing with a year of dust, and then sprinkled with a light layer of ash.

Last year I mentioned that Ventura's landmark Two Trees were dying.  We had enough rain to save the west one for a while.  But the east tree, ever the weaker of the two, was reduced to bare branches.  Back in April, to preserve the landmark, some locals planted another small Tasmanian blue gum eucalyptus to replace the ailing tree into the future.  And then, in October, the east tree broke in half at the top of the trunk.  And then, on December fourth, the fires came. 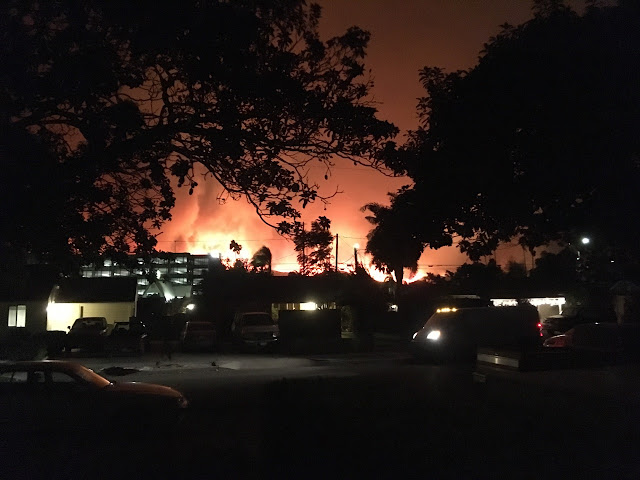 It swept from Thomas Aquinas college in Santa Paula down to Ventura in hours, and obliterated the homes of a few of my friends in less than an hour.  Looking at the blackened hillside, I can still recall the same hills wreathed with flames a month ago, a vivid orange line lighting a city that was otherwise low on electricity.  The smoke blocking all but the sky's lights save a ruddy full moon and the piercing blue of Sirius.

Fed by a month of repeated Santa Ana wind events, the Thomas Fire still rages on today.  They say the fire is 93% contained now, which means it's still smoldering up in the hills.  I'm not sure if that's the source of the lingering smoke at night, or if it's just the smell of the layer of ash still coating the ground.

The new Two Trees are alive for now, although the former east tree, the last survivor of the 1890s, is charred to a crisp.  And we've had a rainless season so far, a December of dry winds.  With no rain in sight, how will the other trees ever recover?

In the old days, the Japanese name for the month of October is Kannazuki (神無月), literally the Godless Month.  The legend is that all of the gods of Japan would leave to attend court at a particular shrine, leaving the rest of the country without its gods.  And as I look into my own yard, a Japanese maple has just finished turning green leaves to red, as it should have done in October.  So why not call it the Godless month, where the powers that used to protect us seemed to have abandoned us?

And that's how 2017 went, one insult after another, until finally the fire came to consume everything.  It's hard to forget about when your view is of one of a blackened hillside, and the smoke still penetrates my nose, with a scent somewhere between manure and that of a cigar.

As the light to the east grows lighter, the most of the wispy clouds begin to fade from view.  My attention has been stuck on the hills for so long, I've forgotten to look around.  The west is lightening up, and the south, well, it was too hazy to see the ocean.

The goldfinches wer twittering up a storm in the abutalon flowers, and the hummingbirds were already feeding from the flowers.  The red-throated hummer tolerates finches amongst the leaves of their favorite flower, but another hummingbird stealing their nectar is not cool.  But he's safe for now.

Meanwhile, a crow took a perch atop a telephone pole behind me.  He gave me the lookover.  The look like, "I am totally not looking at you, don't mind me, but what exactly are you standing up there for anyway?"

Because of the damp and ashy roof, and because the air is calm, I'd remained standing the whole time.  My feet are still a little sore from last night.  I was invited to a rather fancy party last night, and I went in full tuxedo with tails, top hat, and all.  Bowties are cool.  My date had done her best to wear a dress from the era of Hollywood glamour, and we had a great time.

But those shoes did hurt after a while, the price of fashion.  I bought them at a costume shop called Victorian Vogue, along with the most of the outfit.  Don't bother looking them up, because they had finally closed the store the day before, after thirty years, due to slowing business.  Yet another loss.

But a costume sale did get me into the party, so I could pass for someone of high enough class to get in.  It was great to actually be at a party, because so many Christmas parties were cancelled as a result the fires.  We do need to celebrate and have good cheer in the face of all of this, after all.

And yet, at the party, there was still a sense of loss through the revelers.  "Were you evacuated?"  "How close did the flames get?"  "Is everyone OK?"  Those were the questions of the night.  Even in our merriment, tragedy forces its way into our lives in those moments we leave the dance floor.

After a time, I heard the crow behind me call out, and a second crow just dropped out of the sky to join him.  Were they my old friends Phobos and Deimos?  Or another pair, intrigued by an oddly-behaving human, up here alone on a winter's day?

And what does it mean that only here, in solitude, do I really celebrate the new year?  I can't really share this with most Americans.  Most of them wouldn't understand or be willing to wake up now, having stayed out late partying -- or more likely late watching other people partying on TV.

There are no lines to enter the shrines and churches in the U.S., though I know that New Year's was once a church holiday, one of the four main festivals of the short Christmas season.  It's hard to explain why, but the rituals are important.  They give me a chance to step back, escape from my cell phone, and live life in the moment.

Which reminded me that I should really snap some pictures, so I pulled out my cell phone.  More and more clouds are once again revealed as the yellow glow increases to the East, and the sun begins to rise over the Santa Monica Mountains. 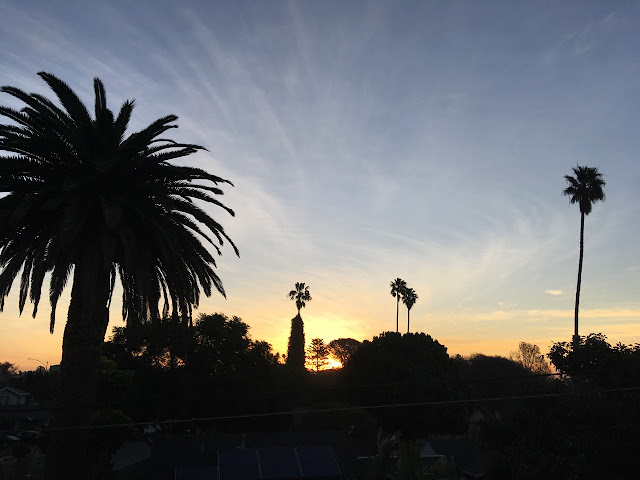 The glow suffused the star pine in the distance, which looked a good deal like Moses's burning bush.  A halo of the purest yellow light surrounded the eastern sky, and then, just suddenly, a ray of true sunlight peeked through.

The corona of light around the sun all seemed to blend together into a golden glow.  With so many clouds, it was hard to see the shape of the sun, but when I closed my eye, I could see the half-disc of the sun perfectly well as an after-image.

All of the other clouds were back, in brilliant white.  Woven cirrostratus to the north east. Rows upon rows of straight line cirrus to the southwest, looking as thin as fishbones.  And was that a dragonfly-shaped cloud I spied?  Well, close enough, I guess.

I guess for every fire that destroys, there's another that reveals beauty.  Even if I have to look a little harder for the beauty.  Maybe that's all I'm going to get out of this year's sunrise.  Maybe I'm just here to grieve, for the fires, for all of the illnesses amongst all of the family, for the death of my dog Abby (her son Shasta stayed asleep this morning), the death of an aunt, and for just a string of rotten luck.  No one I know thought 2017 treated them kindly, and most have their own tragedies to bear.

It worries me that the one portentous thing I said in last year's edition was the thing to come true: That destruction has come to visit us, without the balancing warmth of creation.  And that is why I pray for this year:  I pray for a fire that brings beauty and renewal, one that warms our hearts, and creates more than it destroys.  And, most of all, I pray for rain.  Please.
Posted by Brent Laabs at 12:56 AM No comments: